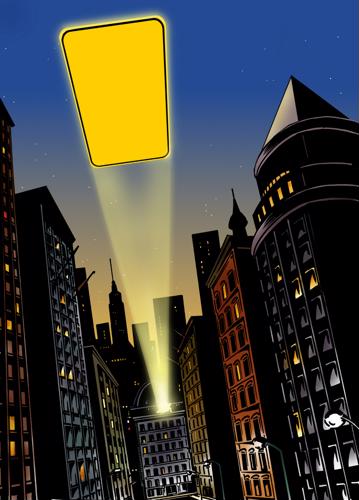 The bat signal is a good back up in case power goes out for a Unified Communications relay.

The Caped Crusader is known primarily for his role as a defender of the weak and punisher of the wicked, but his prowess in unified communications is not to be forgotten. It doesn't take the world's greatest detective to understand that VoIP is the future, but Officing Today's report on trends in businesses guarantees that removing limitations will create a need for UC. A good Bat-team needs a strong Bat-communications systems, and, while there's enough room in his utility belt for just about any gadget he needs, he makes a smart move by having just one communicator. Below are a series of tips that will make sure that any super sleuth can get in contact with their team in time to stop any emergency.

A Reliable Network
Do you know what we never see in the comics or movies Batman stars in? Tech support. The reason for this is that Batman's redundant servers must be secretly housed in the Batcave. By keeping his backups secret, he avoids the problem of his base being hacked by his technologically literate foes, and is able to avoid spikes during periods of heavy use, like when Robin and Bat-girl are busy discussing dinner plans. Telecom Reseller recommends keeping a redundant data center in a separate geographic locations, and we're sure Batman has already done this.

Automation
Just as the Batmobile can drive itself, Batman's communicator network automatically patches him through to who he needs to talk to. While he has Oracle, the savvy surveyor of the skies, to provide oversight over major technical mishaps, Batman needs to be able to rely on the system mostly taking care of himself while he surprises villains. It's difficult to balance delivering knockout punches to thugs while also maintaining strict records for tech support, so be sure that your employees know what they're getting in to.